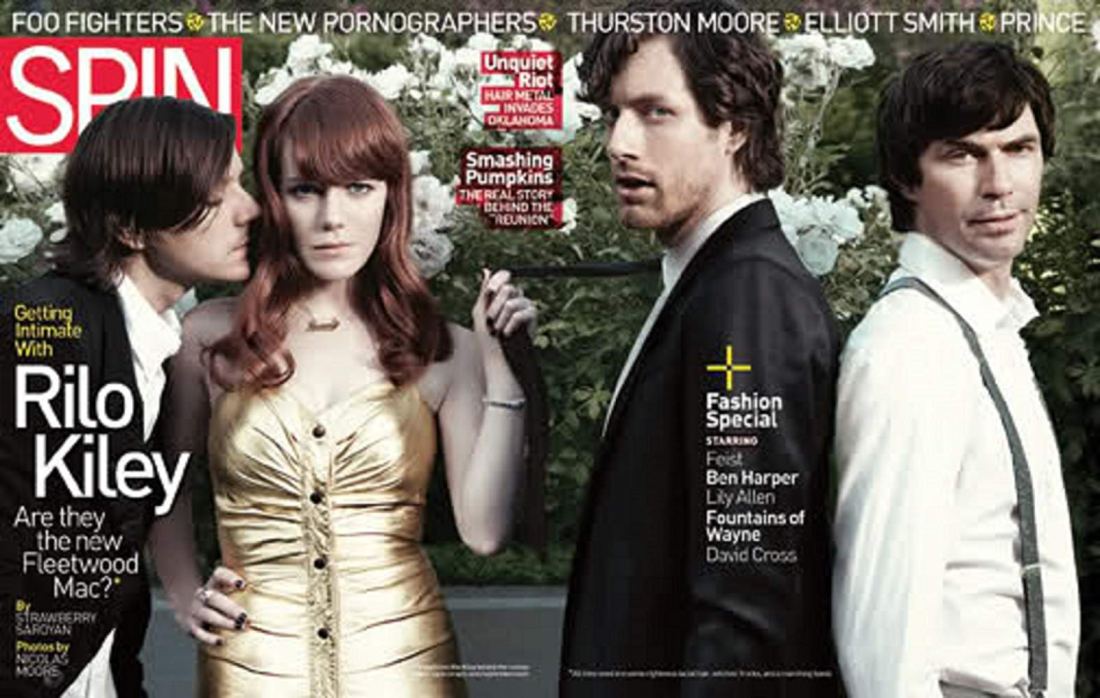 One of the better things about delivering mail is seeing all the magazine covers. For the fourteen years I donned the postal blue I was one of the first people to lay eyes on upcoming issues of print material and it was something I relished for sure. Catching a glimpse of an upcoming issue would lead me to rush out after work and grab a copy, or I’d take a further peek and would thumb through one if the library received a copy. That’s what libraries are for, right?

Over the years I would see the range of human emotions printed on magazine covers, from sheer elation, to tragedies. Covers that rocketed my testosterone to the moon, to ones that, well, didn’t. Some inspired me to pursue a dream and some dared me to try and listen to something new.

I had heard of Rilo Kiley before Spin wrote a cover story about them. There was a girl I hung out with a lot who really liked them, and I really liked her, so I wasted no time in telling her that, “Yeah, Rilo Kiley, I like her stuff.” It may have been that moment where she realized I’d say anything just to make her like me. It didn’t work. It probably was seeing this cover months later where I put it together that Rilo Kiley was a band and not a person.

But there was something interesting about this cover. Are Rilo Kiley the new Fleetwood Mac? Interesting. A comparison to Fleetwood Mac is made when two things are accomplished: sultry, aggressive, lovelorn lyrics and a relationship within the band on the skids. I was intrigued. Everything about the article made me go a pick up their latest release, 2007’s Under The Blacklight.

I’ve been ranking my favorite albums for the last twenty years. Whenever I had a platform to boast about MY RANKINGS, I’d shamelessly declare my list. Halfway through my first listen, I had already declared Under The Blacklight as my favorite album. I don’t remember what else made that list when I posted it on my MySpace page, but I stand by my pick. I’m listening to Under The Blacklight as I am writing this, and yes, it is still one of the best albums ever made. We’re not arguing this fact.

When I finally got to see the band perform at the gloriously dingy Worcester Palladium, I only got to see the first three songs, as the person I was with suddenly decided that they “had to leave” and made a scene on the floor during “Dreamworld“. So we left. I never got an explanation from them as to why we had to leave. Alas, I never can truly say I saw Rilo Kiley perform live. The fact that it was on the tour promoting Under The Blacklight, you know, my favorite album of 2007, and undisputedly one of the best albums ever made still eats at me. Some acts are unforgivable. No, I’m not bitter at all.

Another unforgivable act was that I’ve been slacking in much of my Rilo Kiley listening, both pre-Blacklight and post band breakup. I appreciated the things I has heard, but would never fully dig in. I was told by someone whose opinion I trust dearly that I should stop everything and listen to On The Line. It was halfway into listening to “Heads Gonna Roll”, that I realized that I was needing this for oh, so long.

On The Line is further proof that Jenny Lewis never went anywhere, even if I did somehow. Showcasing passionate lyrics with a tinge of glitter, Lewis is still on the top of the game and continues to set the standard. “Red Bull And Hennessy” is a powerhouse of a song and every time I listen to “Do Si Do“, I feel as though everything is played in slow motion and sepia-toned.

There are a lot of similarities in both On The Line and Under The Blacklight, no question about it. There is also a deep element of personal growth and a wealth of maturity that make On The Line a triumphant chapter in the life and career of Jenny Lewis.

It’s been three years since I last stuffed a mailbox with junk fliers or the latest issue of Real Simple. I gave up a sure-thing career to explore opportunities and start anew. I’m thankful for how working for the Post Office and how it helped define me. I understood what it meant to work hard all day every day despite what the weather was doing or how sick you were feeling; your job must get done. I saw the importance in being a staple in the community. I learned to appreciate the first thawing days of Spring and the quiet celebration of warmer things to come.

With that said, I don’t miss being a letter carrier at all.

just some dude who loves music and wants everyone to listen to his playlists. View all posts by eddiepasketti